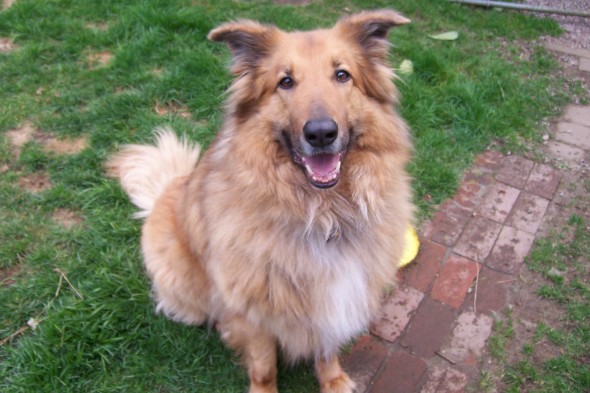 There’s a fresh layer of snow on the ground and the boys are excited.  I should be too, and I am, but I’m also kind of glum today.  A year ago today we lost Baxter.  I haven’t forgotten and doubt I ever could.  But instead of being a complete downer I guess I’ll share a fond memory of Baxter in honor of him.

When it comes to snow, Baxter was never a huge fan.  He’d have to be dragged outside to pee.  He didn’t want to get his precious doggie paws all cold.  I even pondered buying him dog snow boots but then came to my senses!

The first year we ever had snow with Baxter we lived in Nashville and didn’t have kids yet.  John and I decided to take Baxter out in the back yard and see what he did.  He was perplexed and a bit annoyed but tolerated it because we liked it.  That was his nature.  If we enjoyed sitting on hot burning coals he would do it too.  He was ever eager to please us even at his expense.  His whole purpose for living was making us happy (and, I suppose,  butter…he loved butter!)

After Baxter adjusted to the annoyance of the snow we got the flea-brained idea of taking him out on the golf course behind our house and sledding with him.  John thought we could somehow train him to pull us on the sled.  Yeah…that DIDN’T happen.  Then I had the even stupider idea of trying to get on the sled WITH Baxter and go down a hill with him.  Oh my.  He panicked as we started to move and we ended up in a huge pile as we rolled over and under eachother down this hill…much to the amusement of others looking on.

After some failed sledding attempts, I suddenly and urgently had to pee.  So we decided to head back home but then realized that the house keys that were in my pocket were no longer there and we had no spare key or way to get in the house AND I had to PEE!  I pondered breaking a window then decided not to.   I pondered knocking on a neighbors door but was too embarrassed.  So, I did the potty dance while the 3 of us trekked around this huge golf course looking for the keys (basically a needle in a hay stack!)  But we had our trusty Baxter with us and he had a good nose on him.  He dragged us in different directions and eventually led us directly to the keys buried in the snow.  Amazing.  Suffice to say, I made it to the potty just in time.  Baxter saved the day.  You can bet he got some butter as a reward that day!

I love you Baxter.  I miss you intensely and will always remember your kind spirit.