For a while there it seemed like the entire country had snow except us. Well, okay, I guess technically it was except us, Florida, Hawaii, Arizona and a few other places. But when Texans were frolicking in the snow and flaunting it on Facebook, we had snow envy! Yes, we, the Williams family, admit that we coveted thy neighbors snow.

Well, finally the snow arrived. And did it ever! Two days of school were canceled and we had about 8 to 9 inches of accumulation. Fun stuff. 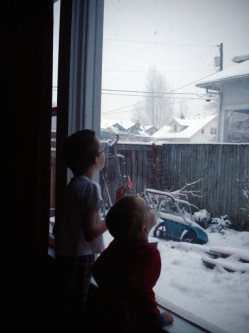 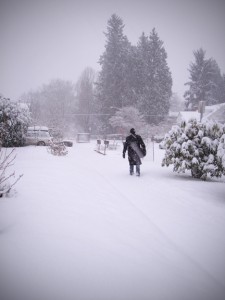 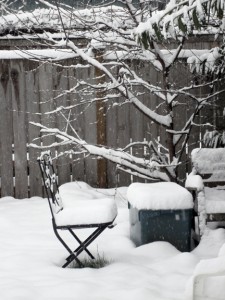 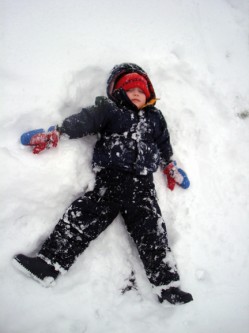 John needed to go into the office so he took our trusty AWD Subaru Forester and headed off, leaving us car-less for the day.

Even though it was only 3 days since I had minor surgery, I decided it would be utterly unfair if I did not take the boys out in the fluffy, white stuff to play. So, by 8:30 AM we were out in the front yard attempting to sled on our “mini-slope”. When I lost my strength to stand up, I hobbled over to the front porch swing and monitored the kids from there.

After a few hours we went back inside to warm up. Then, Orion wanted desperately to go back out in it and I wanted more pain meds and a nap. We were at cross-purposes. Fortunately, there was a tiny knock on the door and two neighbor boys, Roman (6) and Diego (12) were requesting that Orion join them in some sledding. I cautiously agreed and gave Orion my rundown on rules. You know, typical Mom stuff…”wear your gloves”, “look both ways when you cross the street”, “don’t sled near traffic”, “call me”, “be back before lunch”, “wipe your nose”, “wear clean underwear and eat all your veggies”. Okay…maybe not the last one but you get the idea. It was a major step for me. To my knowledge, I have never let Orion go anywhere without adult supervision. But, I remember all the times as a kid that I wandered around in the snow with my buddies. I realized it was time to let the kid have a little bit of freedom and prove that I could trust him.

He had a blast. Around lunch time I called Roman and Diego’s house to check and see if everyone was alive. They were happily eating goldfish crackers and warming up. Orion promised to come home soon. When he returned he had lots of stories to tell and was so proud of himself that he walked home alone. He reminded me of all my rules and told me he diligently followed them. What a good kid. He’s growing up and it’s bittersweet. 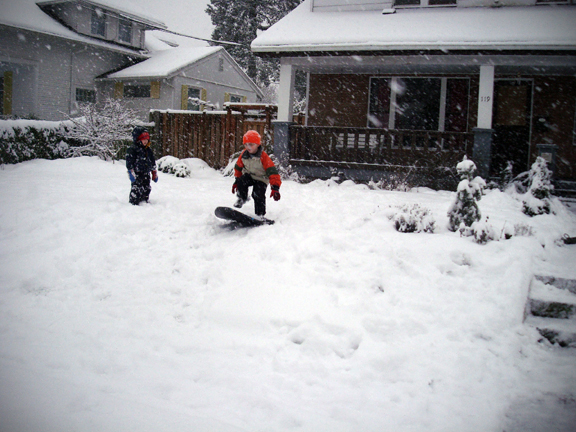 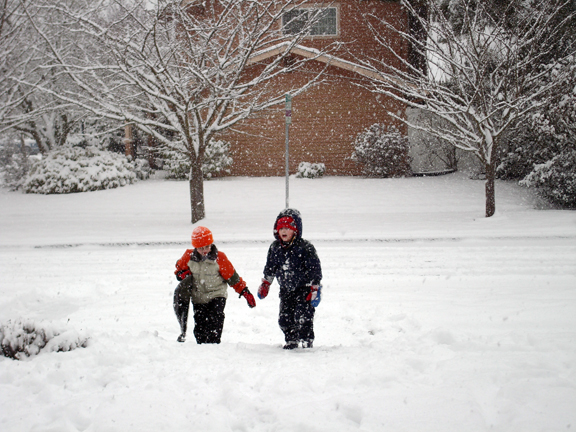