Sadness at the loss of our family dog 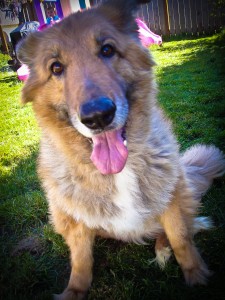 Baxter after an escape attempt - April 2010

Our 10 1/2 yr old dog, Baxter, passed away suddenly last night after getting quite sick.   John rushed him to the emergency pet hospital where he passed away about 30 minutes later.

In the past 6 months he had really started to slow down.  He was less energetic and didn’t want to play Frisbee as much.  In the past 3 months he really had to be convinced to get up and go outside.  I guess I knew we were close to losing him because when I took him to the Vet about 2 weeks ago I fully expected them to tell me he was dying of some disease.  But they didn’t.  They told me he looked healthy and administered all his regular shots.  I got my hopes up that we would have a few more good years left with him.  It turns out that my original intuition was right.

We didn’t tell the boys until this morning because they were already in bed when Baxter passed away.  Orion was and still is quite devastated.  Oliver doesn’t seem to understand it and isn’t all that phased.  He’s a bit too young to understand.

I was unable to sleep all night.  I kept thinking about Baxter.  Then I would doze off and have very vivid dreams of him.  At one point I was certain he was standing by my bedside with his wet nose against my face.  I swear I felt him breathing on me.  But when I opened my eyes, he was not there and reality sank in.

Baxter was a gentle giant at 85lbs.   He was always so tolerant of the boys even when they played rough with him.  He loved herding them around the back yard when they played.  He was amazing at sensing emotions and always knew when I was sad or lonely because he would come and sit at my feet at the computer and just look up at me with love.  When John would go out of town, Baxter would sit by me at the couch and keep me company.  He was so protective too.

He loved playing Frisbee and we loved pretending we were in the Frisbee Olympics with him.  He would twist and turn and pluck that Frisbee out of mid-air when it looked impossible.  He was sneaky and would try to eat the boys’ Popsicles when they weren’t looking.  He also liked to sneak out of the back gate and go exploring in the neighborhood.  One time, he actually escaped to a nearby construction site at the State Capital and charmed the construction workers so much that they would come by our house on occasions with bones and dog treats because they missed him.

One of the most  amazing stories about Baxter came when John and I had just moved to Bainbridge Island.  Baxter had some strange cut on his leg and  I took him to the Vet.  The Vet told me that it was a lick granuloma.  That basically meant that it was a self-inflicted wound.  Baxter had licked himself so much that he caused a wound.  Apparently, it’s often attributed to Obsessive Compulsive Disorder in dogs.  I asked why Baxter would suddenly have OCD and the Vet said that it could be a number of things.  Then he casually listed them;  a move to a new house, loss of someone in the family, or….maybe I was pregnant!  Wha!?  I had to have him repeat that last one.  He said that dogs can smell even hormonal changes in their owner and that if I was pregnant, I would smell different.  That could have caused Baxter’s OCD reaction.  I immediately drove to a drug store for a pregnancy test and went home to find out that Baxter was right.  I was pregnant! It was not exactly the way I had ever imagined finding out such wonderful news, but I’m glad now that Baxter was a part of it.

He will always be remembered, loved, and greatly, greatly missed. 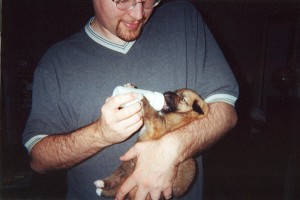 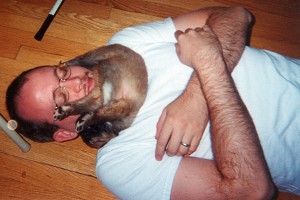 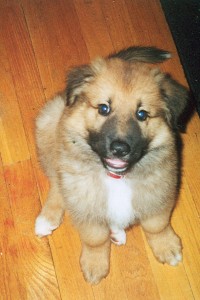 Irresistible Baxter as a pup 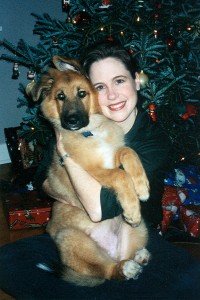