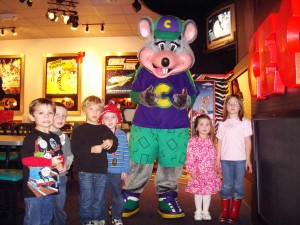 Ollie will be turning 4 next week and we decided to have a party for him this year at Chuck E Cheese.  Every kid’s dream, every parent’s headache!  That place is like a casino for kids.  Insane volume and lights.  Total sensory overload.

We were hoping that Orion could go too but he came down with a stomach virus right before the party and wasn’t able to come.  Thankfully, our good friends Carol and Dustin came over and stayed with Orion while John and I both went to the party.  I could have never handled that chaos alone.

It was a decent turnout and all the kids had fun playing games.  Ollie was a bit scared by the Giant Rat (ie…Chuck E. Cheese) that came out and insisted on singing with him and trying to get him to dance and clap.  He would have none of it.  He just looked petrified.

The fun thing that he did get to do was go in this crazy ticket tunnel and try and catch tickets to spend on prizes.  They basically lock him in this big tube that blows air and the paper tickets float around him while he tries to catch them.  He thought it was fun. Good thing, since he was trapped in there!  I’ll add a video of that at the end of this post.

I am relieved to have another kid birthday party successfully behind us!  We love you little Ollie!!! 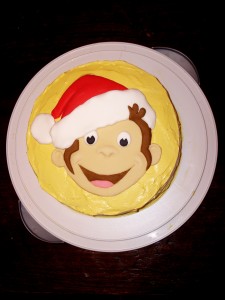 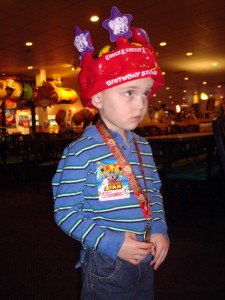