It snowed in November! 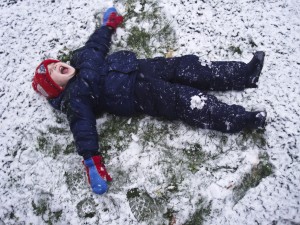 It snowed today!  A rare thing in November in these parts.  Oliver was so excited.  Two years ago when we had the “big snow”, Oliver was too sick to go out and enjoy it.  Orion had a blast though.

So this year, Oliver is actually healthy and ready.  The only unfortunate thing is that the rest of us are definitely NOT healthy.  But, seeing the excitement on his sweet little face compelled me to bundle up and face the snow.

Ollie had recently seen the show “Frosty the Snowman” and wanted to make a talking snowman.  So, we went right to work on that.  Soon we had the first snowman on the block.  We decorated it’s face and Ollie was sad that it wasn’t talking.  I ran inside to get a hat.  When I put it on the snowman he was still perplexed.  “Mama, he’s supposed to say Happy Birthday.  Why is he not talking?”  I guess that’s what Frosty says in the TV show.  I told him that my hat was just a normal hat, not magic.  He thought I was lame for not owning a magic hat.  C’mon Mom, get a clue!   In his disappointment, he deconstructed the snowman’s face just in time for a neighbor to comment on how nice the snowman was and then watch it tumble in a pile to the ground.  Oh well. 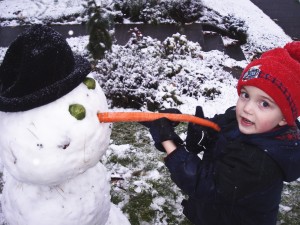 We also had a snowball fight.  I lost.  We then had fun throwing snowballs toward Orion’s bedroom window where he was resting and recovering from a fever.  He peeked out the window wearing his pj’s and laughing.

It was sad that Orion couldn’t join us too but he’s been so sick lately.  Fever, vomiting, headache, runny nose…the works.  The kid is NOT healthy.  He even had some febrile hallucinations where he was saying weird stuff and not making sense. But I was assured by our Doctor friend that stuff like that can accompany a fever and we should not be alarmed.

John and I are sick too and it’s been hard taking care of the boys through our sickness.  Orion was up every hour last night until about 5 AM.  Then he slept for a 2 hour stretch.  With all the sleep deprivation, it felt like I was nursing again.  But as each day passes I’m feeling slightly better.  I’m just praying we all recover in time for Thanksgiving.

While I tended to Orion, John slept next to Ollie’s tent in the playroom downstairs.  We’ve decided to keep the boys separated to try and keep the illness away from Ollie.   So far, so good.  I’m just waiting for that to change though. It’s like a germ factory in here.

Now the boys are asleep and I need to go coax Baxter out into the snow.  That dog hates getting his paws in the cold snow and would rather hold his pee until the snow goes away.  With the looks of the weather report…he may be holding that pee for days! 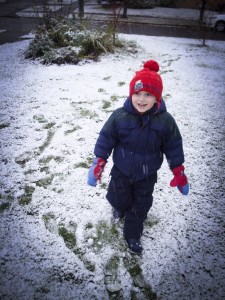 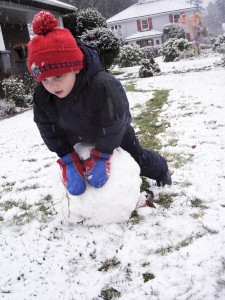 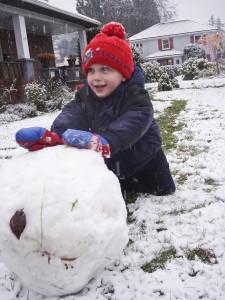 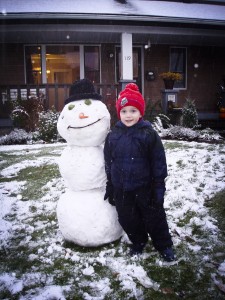