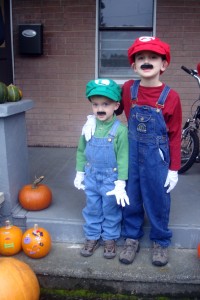 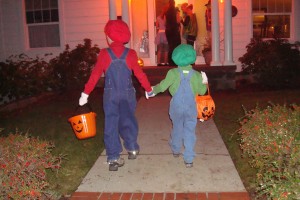 This year for Halloween, Orion decided he wanted to be Super Mario.  He also decided that he wanted his little brother to be Luigi.  Since Oliver is in this mode of looking up to Orion and wanting to emulate him, he agreed to the Luigi plan.  But I doubt he was even aware of who Luigi was.

I went the cheap route and only bought hats, gloves, and mustaches.  The rest of the costumes came from Value Village.

I had no idea they’d be so stinkin’ cute in their mustaches.

Originally, Grandma was planning on staying overnight and hanging out to hand out candy.  But she felt an illness coming on so she cancelled.  Since I already had the makings of a big soup dinner, I called our friends Carol and Dustin to come over.  They agreed.  They’ve been here before on Halloween and enjoy the excitement of our crazy neighborhood.

Our neighborhood comes alive on Halloween.   It’s like a wild block party.  This year there was a live blue grass band playing on a front porch, the typical madness at the pumpkin house that carves about 100 pumpkins, and many amazing decorations, smoke machines, etc.

The rain held off until about 9:00pm.  We ended up getting 359 trick-or-treaters.

Oliver was a bit timid about knocking on doors this year so Orion comforted him by holding his hand and taking him to each house.  So cute!  John says the best thing about Mario’s costume was Luigi!  I think most people would agree.

John carved amazing pumpkins again this year and even grew a few.  He carved one  in the likeness of Oliver, one as Orion, and one with a Lego Star Wars theme.  He received many compliments on the pumpkins.  Some people even suggested that he could someday be the new “pumpkin house” in the neighborhood.  I could see the wheels spinning in his head at that comment.  Looks like we may need to increase our pumpkin budget in years to come! 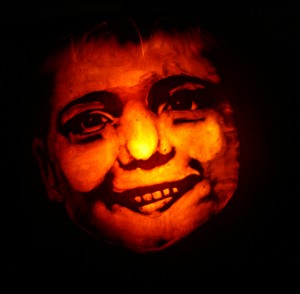 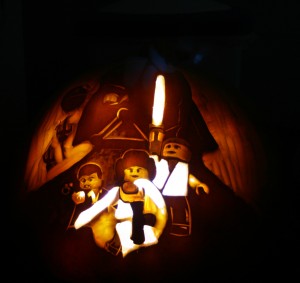