Oliver finally plays in a soccer game and makes contact! 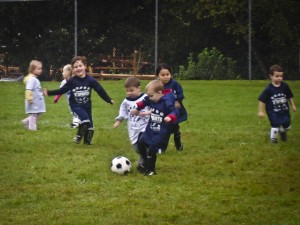 This fall we decided to sign Ollie up for soccer.  Anyone who knows him at all knows that the boy is obsessed with balls.  When he first started talking, his first word was ball (at 7 months old).  When he first started forming two and three word phrases he would always ask when we were going somewhere “Balls in it?”, meaning…”Are there balls to play with where we are going?”

So, now that he’s 3 he is old enough for soccer and we decided to go for it.  But soccer in the Pacific Northwest means lots of standing in the rain for everyone.  That was what we did this weekend.

Ollie had a soccer game.  It was his 3rd game but the first one in which he finally agreed to step foot on the field and play in.  In previous games and practices he got so upset that there was only one ball and so many kids.  He’s not keen on sharing his balls.  So typically he would sulk, pout, kick the ground, stare at his feet and yell “No, I don’t have to!”.  If I was anywhere nearby he’d try to crawl up my leg so I would hold him and he could wimper and cry.

But miracle of miracles happened today because he reluctantly decided to go on the field with Daddy during the game.  He mostly just stood in the middle of the field without moving.  But a boy suddenly came by him with the ball and Ollie unexpectedly snapped into action.  He chased down the ball and kicked it away from the boy IN THE RIGHT DIRECTION!  It was great!  And the even better thing was that I happened to snap a picture of the moment.  A blurry picture but a picture non-the-less.  It made standing out in the rain for an hour all worth it.  Even big brother Orion enjoyed standing on the sidelines and cheering Ollie on.

After the game we headed for an overnight at Benson Lake to spend time with Grandpa Gadget and Grandma Nancy.  Fun times! 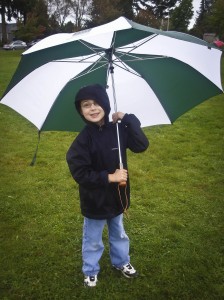