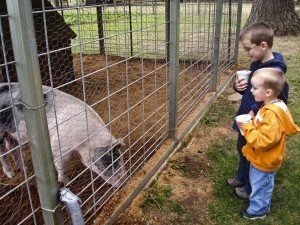 The weather is starting to turn fall like.  It’s cold in the mornings and misty.  We thought it would be a perfect time to go to Lattin’s Country Cider Mill with the boys to eat warm apple fritters and hot cider.  Yummers!

The homemade fritters and fresh donuts were awesome.  The cider was awesome.  The yellow jackets hovering all around us as we ate were NOT awesome.  I totally freak out around bees.  I don’t like them.  Nope.  Not at all!  Not.  Did I mention that I do NOT LIKE BEES?!

Anyway, the boys had fun feeding the animals.  They’ve been into watch a claymation TV show lately called Shaun the Sheep.  It’s done by the guy that did Wallace and Gromit.  Fun stuff.  So they were very excited to see the sheep.

The other fun thing was this feeding pulley thingy they had for the goats.  So much fun.  I’ll add a video so you can check it out.

During this visit to the farm, Daddy decided it would be a fun time to tell the boys where bacon came from.  Yikes!  They didn’t seem to be rattled by the news at all.  Orion claims he wants a farm with chickens.  Being that I’m a city girl, I don’t see that happening in his immediate future.