Today was officially the first day of school in Olympia, WA and Orion was excited and a bit nervous to start school.  He had heard that in 1st grade you aren’t allowed to get out of your seat and roam around the classroom like you often are in Kindergarten.  This made him nervous.  He tends to have antsy pants a lot.  Hopefully, he’ll adjust.

I drove him to school the first day. We were early and ran into one of the school counselors in the hallway.  He asked about the school bus and we mentioned that we wanted Orion to take the regular, big bus this year rather than the smaller, special education bus.  There was some hesitation but the counselor wrote an addendum to Orion’s IEP (Individual Education Plan).  Tomorrow will be Orion’s first day trying out the big school bus.  He is very excited.

Orion is also very excited to be sitting next to Allegra, a familiar friend from his class last year. And he’s thrilled that his teacher this year is Mrs. Martin.

After leaving school, Ollie said in a sad, little voice “Mama, I miss O-wy-on sooooo much”.   Then he paused for a moment and cheerfully said, “Can we go home and play with his toys now?”  I guess he got over missing Orion quickly.

Hours into playing with Orion’s toys Ollie grew tired of it all so we decided to head to the Children’s Museum.  Ollie had a blast.  He doesn’t officially start Preschool until next week so he’s enjoying his last moments of summer freedom with Mom’s undivided attention.  It was a busy, fun day. 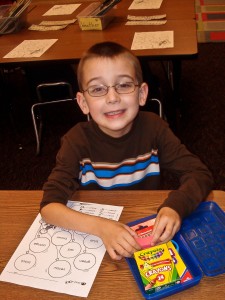 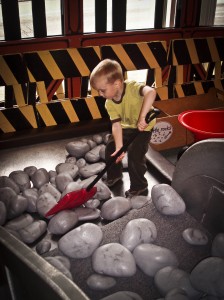