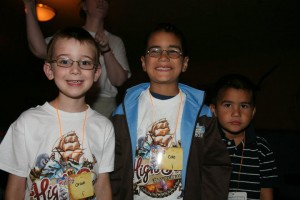 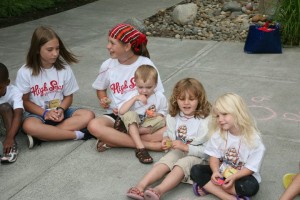 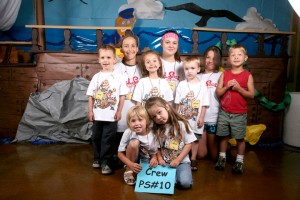 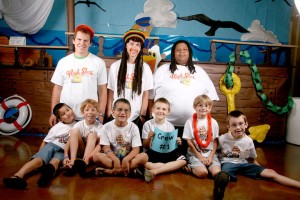 This year I signed both boys up for VBS because they had openings in the 3 yr old groups.  Oliver was a bit nervous to go.  I’d drop him off with his group and he’d immediately sit on the floor with his legs criss-crossed and suck his thumb.  This thumb sucking is a very new habit that he’s started only when he’s socially nervous.  The preschool helpers had to coax him off the floor to get him to follow the group each morning.  I consider this early training for preschool this fall.  Let’s hope he kicks the thumb sucking habit.  Although, if genetics have anything to do with it, it may stay with him for a while.  I think I sucked my thumb until about 2nd or 3rd grade.  My parents have the orthodontics bill to prove it!

Orion was thrilled to go to VBS and could even find his own group by himself each day.  It helped that he was in group #1 right in the front of the church.  He was so excited to meet 2 new friends at VBS this year, Cole & Hunter.  They are brothers and everyday Orion would tell me how much he loved playing with them.

This year I did not volunteer at VBS.  It was a rare thing to have those boy free moments and I tried to maximize them since we are working on updating our kitchen and various other home projects.  The time went by very fast.

Before VBS ended I bought a CD of the songs they sing and the boys are now addicted to it.  They can sing all the words.  Orion sings it loudly at the mall, Target, wherever.  He’s my little evangelist.

Below is a video of Orion singing the theme song to VBS this year.