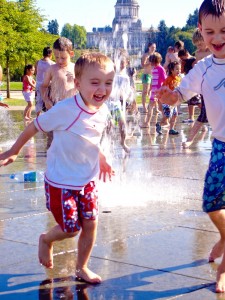 According to the thermostat in my car, it was 99 degrees today in Olympia.  That is hot for anywhere, but particularly for an area where most people do not have AC in their homes.

John had a three day weekend and worked tirelessly on putting in a new counter top and ceramic sink in the kitchen.  It was exhausting work in this heat but it looks much better than the awful pink counter top that was here when we moved in.

My job was to keep the boys occupied and out of John’s way while he worked.  I also had a goal to try and keep us all cool in this heat.  Hard to do.

We started the day off by going to Church.  That was one building with AC that I could count on.  They were planning on playing a Veggie Tales video at Orion’s Sunday school class and he is terrified of those talking vegetables.  So, he agreed to sit quietly with me in the adult service.  He knew the alternative was being forced to return to the room with the talking vegetables.  He hardly said a peep and just drew pictures quietly in his seat.

After church we went out to get some pizza….building number two with AC…check!

Then we returned home, changed into swim suits, and headed toward Long Lake to go swimming.  I guess everyone and their brother had the same idea because the place was so packed that we couldn’t find a parking spot.

With two very disappointed kids, I left the lake in search of an alternative form of cooling off.  We ended up downtown at the fountain.  Believe it or not, I had never taken the boys there.  I always thought it was something I should do with John there with me for safety reasons.  But Orion promised to look after his little brother and he did a great job of that.  They had a blast! 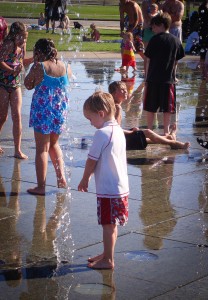 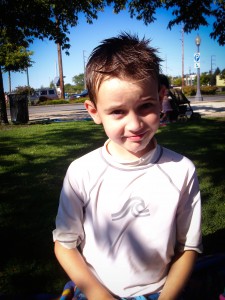