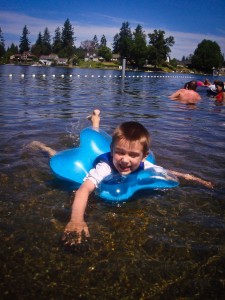 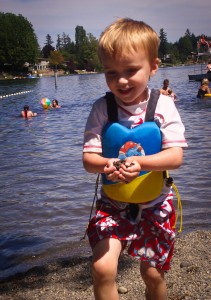 I decided to take the boys to Long Lake today because it was 86 degrees outside.  This was the first time I had ever taken them swimming by myself (without another helper).  But since there were two lifeguards on duty at the lake I didn’t feel so frightened by it.  Any of you that know me know that I tend to lean toward being the overprotective parent so this was a real step forward in allowing more freedom for my kids and loosening my tight grip on them.   I guess I didn’t loosen my grip that much since you’ll notice by the pictures that they are very bogged down by flotation devices. 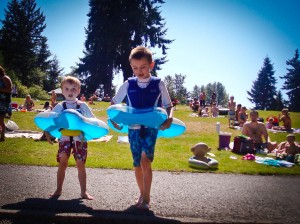 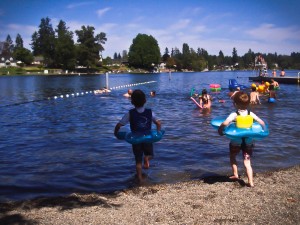 The boys had fun racing into the lake.  Ollie started out very timid of going deeper than his knees in the water.  But by the end of two hours he was bounding into the water.  Orion did quite well kicking and maneuvering himself around in the shallow end.  Small steps are still steps in our quest to teach them how to swim.

I reluctantly wore my swimsuit under my clothes and finally, after an hour or so, decided to quit being so self-conscious and remove my shorts and t-shirt because the likelihood of me running into anyone I knew at the Lake that day was slim.  Only moments after getting comfortable on my towel I look up to see a figure looming in the bright sun above me.  I squinted, looked up, and wouldn’t ya’ know it…it was Aloma, our neighbor from down the street and the mom of one of Orion’s classmates.  She had a golden tan and a tiny bikini and I suddenly felt like an albino beached whale.  She kept talking about a family trip she would soon be taking and all I could think about was how I felt completely naked and embarrassed.  Maybe it’s time to hit the gym and one of those spray tan places again.

After my neighbor left, the boys splashed around for at least another hour.  When we returned home, Ollie was completely zonked out from all that time in the sun and I plopped him on the couch where he didn’t budge for what seems like hours.  It was a fun, summer day.