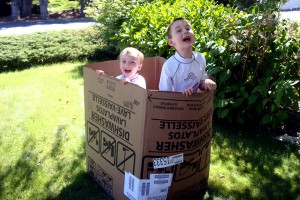 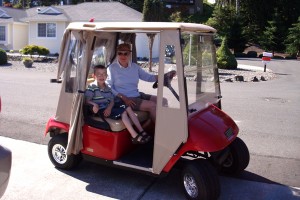 The weather has finally turned into summer after more than a month of dreary gloom.  It was the perfect time to head to Sequim, WA to visit Grandma and Grandpa Jim’s new house along the golf course.  John and Baxter stayed behind in Olympia.  It was just me and the boys on a long, LONG drive up there.

The house was very nice.  A spacious, open layout.  The thing Grandma likes most is the quietness of it all.  No freeway noise to crowd her brain like the house in Bellevue.  But her peace and quiet got intruded upon when we arrived!

Grandma had wisely set aside some large appliance boxes for the boys to play in and they had a great time drawing on them, jumping in them, and knocking them over while inside.  There were lots of laughs, giggles, and a bit of fighting.  There was also a blow-up kiddie pool in the front yard that they enjoyed.  And when that no longer captured their interest, Grandpa emerged with a golf game that somehow never made it to the Christmas tree pile this past year.  Ollie loved reconfiguring the track to the golf game and hitting the balls.

Grandma also took each of the boys on a cruise around the neighborhood in her red golf cart.  Ollie whined and didn’t like it much.  Orion was thrilled.  And Minnie the Schnauzer was probably just plain jealous that his Mommy (Grandma) was focusing her attention on those boys instead of her.

While the boys and I were on the back porch later in the day, we noticed that same red golf cart passing along the golf course.  Lo and behold, it was Grandpa Jim at the 12th hole playing golf.  We watched him take a swing at it.  He did quite well according to Ollie!

We also went to the community pool and swam briefly.  And as if that wasn’t enough excitement, a block or two away from the house was Graymarsh Berry Farm.  We headed over there and picked buckets of strawberries that we later ate over our french toast.  Yum!

The two really endearing things I’ll remember from this trip are of the boys in their tent.  One night after I put them to sleep in their tent that they share I suddenly heard pitter patter of feet escaping.  I crept down the hall to catch them in the act of mischief and found them back in their tent with Orion re-reading their bedtime stories to his brother.  So sweet.

Then in the morning I thought I heard Orion stirring in the tent.  I peeked over the top screen of the tent to see if he was awake and he was wide awake, in the spoon position with his brother, hugging him while Ollie snored away.  So precious.  I just love those boys.