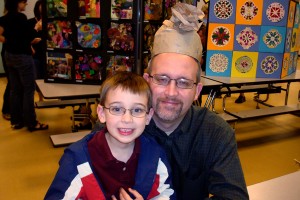 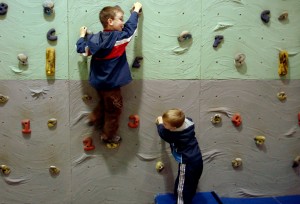 Tonight was Orion’s art showing at school.  For the past couple of months he’s been taking art classes after school in a program called Art Pioneers.  He loves it.

We baked cookies, invited our friends Carol and Dustin and headed out to see his masterpieces.  There were lots of creative projects to look at.  Each student made a very fun paper hat that they were to wear but Orion said that the tape was sticking to his hair and refused to wear his.  So we took turns wearing it.

The boys had a lot of fun climbing around on the climbing wall in the gym.  It was a good distraction for Ollie who wasn’t too interested in looking at art.  Between climbing and cookies, we kept him occupied.

We all had a good time until a traumatic event happened.  Orion and Ollie were playing around in the cafeteria and Orion somehow got trapped inside of the retractable wall that divides the gym and the cafeteria.  Suddenly he was screeching “Help!” at the top of his lungs.  He was quite frantic and we had no idea if he was actually injured or just scared.  John and Dustin worked quickly to try and remove Orion.  There was a button panel on the wall that looked like it operated the opening and closing of the wall.  But we were afraid to push buttons for fear that it would close up on him more and squish him.  Orion’s speech therapist, Vicki, and I ran frantically up and down the halls looking for a custodian to help.  By the time we returned to the cafeteria Dustin had managed to pull Orion out of the wall.  Those were some tense moments.  He was fine.  Shaken, but fine.

That night he was too afraid to sleep and we had to go into his room every 15 minutes or so to reassure him.  Such trauma.  But a silver lining is that we returned home with lots of fun, frame-able art projects. 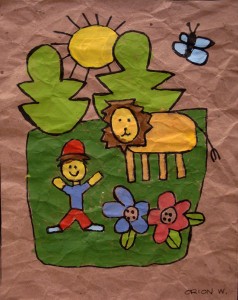 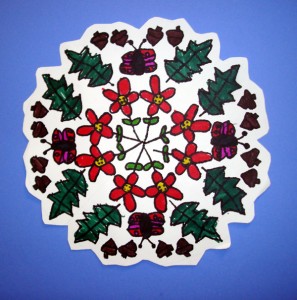 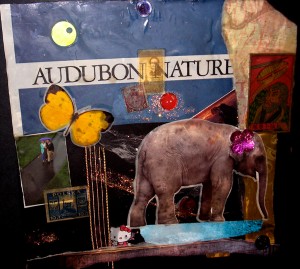 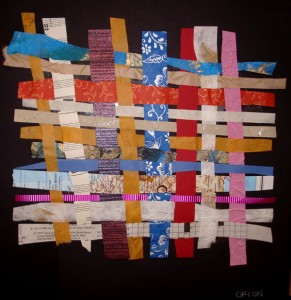