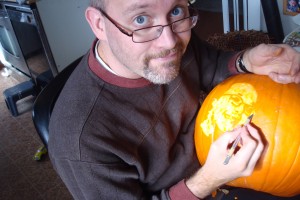 Another Halloween in the South Capital Campus neighborhood, and as usual we had a large crowd of trick-or-treaters.  Although, this year, it didn’t rain so we expected much bigger crowd. I think the count was slightly over 300.

Carol and Dustin came over for dinner and then hung out to watch the chaos.  While they manned the fort, we quickly took the boys from house to house.  Oliver loved it and would knock on a door and say “Give me candy”.  We need to teach him some Halloween manners.

Oliver has the misfortune of being forced to wear whatever costume he fits in to that used to be Orion’s.  So, this year he dressed as a chicken.  Orion dressed as Super Flash.

John impressed us, as usual, with his amazing pumpkins.  He made a Thomas pumpkin as well as a pumpkin carved in the likeness of a portrait of the boys.  I pathetically tried my hand at it and made an Elmo pumpkin.  It paled in comparison to John’s masterful skills.

Orion also trick-or-treated at his speech therapist’s house and she and her husband dressed as the couple from the American Gothic painting.  It was a fun night. 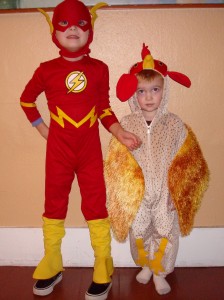 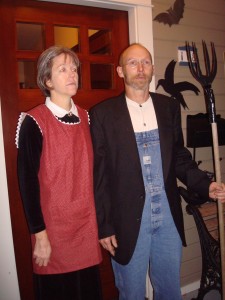 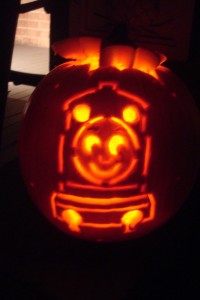