Yurting on the Oregon Coast 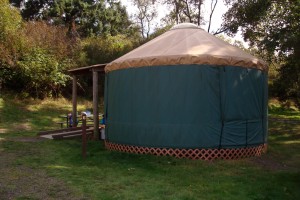 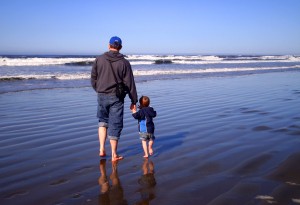 We booked a yurt at Fort Stevens State Park along the Oregon Coast.  It’s just outside of  the little, quaint waterfront town of Astoria, OR so it’s not too remote or far from civilization.  The boys had never stayed in a yurt and were very excited to go.

Inside the yurt it was small but had everything we needed.  It had twin bunk beds and a futon that pulled out into a full size bed.  You basically bring your own linens and a camping stove for cooking outside since there is no kitchen or cooking facilities.  There is a fire pit and picnic table outside the yurt though.

And there were very nice showers just down the path from our yurt.  John and I were so amazed at how nice Oregon Parks are.  It seems they do a much better job of keeping up State Parks and providing nice and clean accommodations.

The weather was quite nice in the morning so we headed to the Ocean.  We had a $1 kite that we had purchased in Astoria and had no idea how much use we’d get out of that thing.  It was perfect kite flying weather on the beach.  The kids could hold the kite and just stand still for what seemed like forever and the kite would stay up.

The boys liked playing on an old wrecked ship along the beach, The “Peter Iredale”.  It was an oceangoing ship that was wrecked near the mouth of the Columbia River in the early part of the century.

In the evening we spotted a family of raccoons near our yurt that came right up to us hoping for scraps of food.  They didn’t even scare off when we pointed flashlights at them.  I guess they’ve been fed by strangers many times.

We spent part of one day shopping around the old town of Astoria.  It was a great trip and we plan on returning next year. 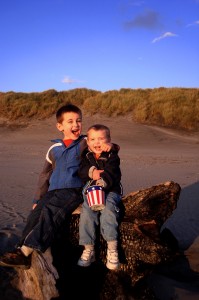 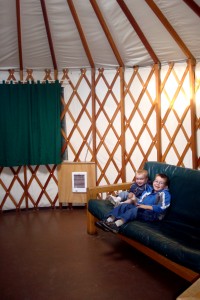