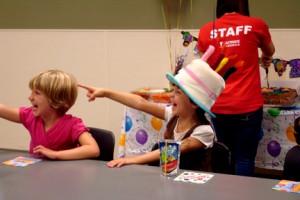 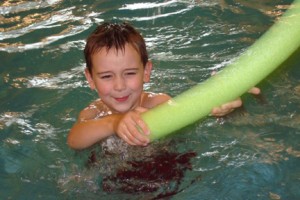 Orion had quite a social day today. We started out by going to Pioneer Elementary playground for a pre-school playdate with some of his future kindergarten classmates. Orion had a good time playing with a little boy named Alex who had a cast on his arm from a camping accident. I think his cast slowed him down and so Orion felt he could actually keep up with someone.

After that playdate we headed out to a birthday party for Denali, a girl that lives around the corner from us.

It was a swimming party at the YMCA. And even though Orion knew none of the kids except Denali, he had a great time playing with everyone. He may have been a bit too exciteable at times though.

He had a blast in the pool playing with a noodle and hopping around. The water was just shallow enough for him to stand in. That was nice.

The biggest challenge was leaving. He cried and was a bit embarrassing. I think he could have stayed for hours longer if given the choice. So, it was not the best exit. But it was still a fun time.