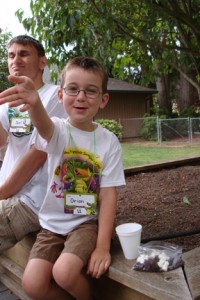 This was the first summer that we were bold enough to try going to VBS (Vacation Bible School). In previous year Orion just had too many struggles adjusting to new, loud, and chaotic situations and we knew he would melt down. But his tolerance is much better now that he’s almost 6.

Still, it was overwhelming and definitely the music was TOO LOUD. Even Mommy’s brain hurt from it.

I volunteered to help with the kid snacks all week and had no idea what a major job that was. There were about 300 kids and we had to work fast and furious to get things out to the snack area on time. That was a challenge with all of the different personalities in the kitchen area.

4 out of the 5 days one of my kids melted down before VBS had ended and I was suddenly doing childcare so could no longer help with snacks.

Oliver was a bit frustrated being in the 2 yr old room for so many hours. That was new to him. Most times when we go to church he’s just there for a short time. Not for 3+ hours. So at about the 2 hour mark he would lose steam.

Regardless, I think Orion had a great time and learned some new coping skills for being in such a large group. We will definitely try VBS again.