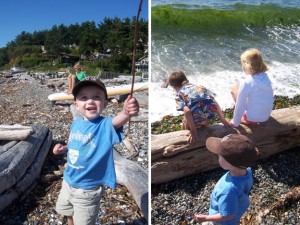 The Jenkins’ clan was having a gathering at Camano Island so we made a day of it. Orion hadn’t been there since he was a toddler and Oliver had never been there. It was fun to see all the kids interact.

Behind the house, Uncle Ken had a kid’s playhouse built. Orion absolutely loved playing in it with Jolene (and Sydney and Kayla). The little kids had fun riding toys around the pickle ball court. And Ollie, being the ball boy that he is, loved hitting the pickle ball around.

But once Ollie discovered some water toys on the beach it was all over. He wanted to fill up cups of water and dump them on people’s toes. Uncle Seong Yoon tolerated this very well so he became Ollie’s main victim.

And speaking of victims, I guess little Logan (cousin Kristin’s son) has a bit of a strong personality and at one point started beating up Orion when he wanted to ride on the toy Orion was on. Orion somehow knew that Logan was much younger and that he shouldn’t hit back. So he just took the beating. Kind of amusing. Not to fear, adults eventually intervened.