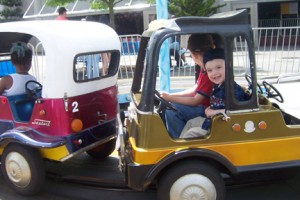 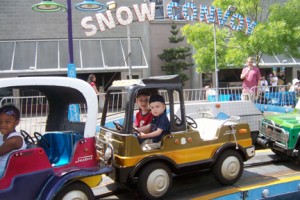 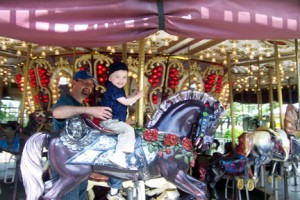 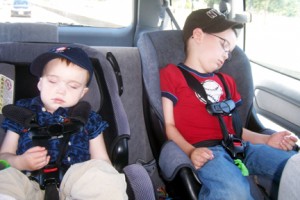 Today John’s Aunt Becky was in town from Tennessee so we decided to spend a day in Seattle with her. It was a hot, hot day but it was beautiful out.

First we headed to the Pike Place Market where they were having some sort of street festival. Then Aunt Becky and her friend were interested in going up in the Space Needle so we went over to Seattle Center.

The Space Needle is immediately adjacent to Fun Forrest. It’s an amusement park that I used to go to when I was a kid. It’s small but fun.

As soon as the boys saw the rides they couldn’t wait to go on them. Ollie was more interested in the fast, bombastic, crazy rides and Orion was going for the more mellow ones. We compromised and ended up on the little car convoy. They also tried the carousel.

Orion wanted to attempt the bumper cars but Ollie was too short and we knew it would break his heart to have to wait on the side so we promised Orion he could do that some other time with Grandma.

By the end of the day we were all exhausted. The boys sacked out in their car seats on the drive home.

We made it home just in time to greet Aunt Kathy and Uncle Seong Yoon (Uncle Onion, as Ollie calls him). They were coming to babysit while John and I enjoyed a date night. We went and saw an animated film called UP and loved it. It was a adventure packed day and lots of fun!