Too early for the park! 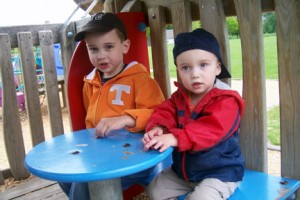 Some days the boys are up very early and full of energy. It’s usually the same days that I have absolutely NO energy. Go figure. This morning they were both up and ready to go. At 8:00AM, just after breakfast, they wanted to know if we could go to the park. I was groggy and still sipping on my first cup of morning tea. But I was also overwhelmed with the concept of trying to entertain them at home so I agreed.

It was a bit cold out at that hour so we put on jackets and long pants, even though lately it’s been in the 80’s. We arrived at Pioneer Park and they were ready for fun. But, much to their chagrin, they were going to be playing by themselves.

No other parents in their right minds would be at a park at that hour. So, I jumped in and chased them around. Ollie liked when he would hide in the tunnel and I’d pop in and scare him. Finally I grew tired and we loaded up to go home…just as car loads of kids started to arrive! Figures again!!! The boys were sad temporarily but then were happy to be bribed with “ooft lover” in the car (that’s what Ollie calls fruit leather).