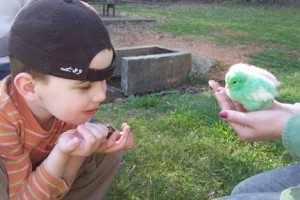 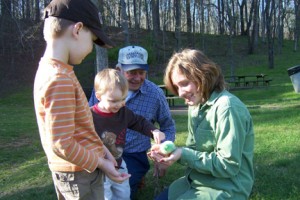 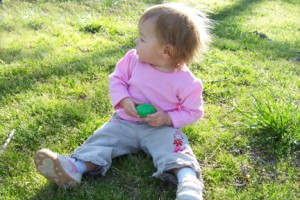 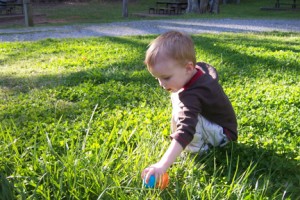 It was our 9th Wedding Anniversary today although we really didn’t do much in the way of celebrating it alone since we were still visiting with family in Nashville, TN.

I started the day having breakfast with my good friend Anita. We had a nice breakfast at Cracker Barrel.

While I was having breakfast, John watched the boys play in Aunt Dorris’ yard with Madeline. Cousin’ Becca showed up to visit too.

Then we headed South towards Lawrenceburg, TN to visit with John’s Dad, Oneida, Matt, and little cousin Hannah.

We drove to Davie Crockett State Park and had an early easter egg hunt with Grandpa. The boys also played in a creek. Then Aunt Oneida had a very special surprise. She had brought out two live colored easter chicks.The boys were very amused by them.

It was neat to see cousin Hannah walk around with the boys. She’s still a bit hesitant on her feet but it won’t be long before she’s tearin’ it up with them.

After going to the park we checked into our cabin in Powdermill Hill, TN. The we headed to a family gathering in our honor at the family general store in Bodenham, TN. We stayed there until late into the night shooting the breeze and eating popcorn by the fire. Good times!