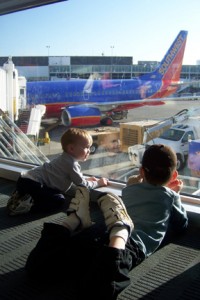 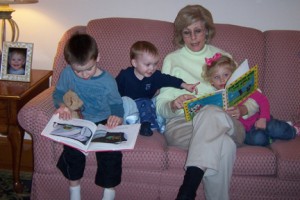 Our spring break adventure began as we headed to Nashville, TN to visit with John’s extended family.

We were very nervous about how the boys would behave on the plane. We had a hunch that Orion would be fine since he’s able to sit still for long periods and entertain himself with art projects. But Ollie is a typical, busy two year old and anything could have happened.

Well, the flight turned out to be very unexpected in a number of ways. First, we had an unexpected stop in Rapid City, South Dakota. Apparently a passenger on the plane had some sort of medical emergency so they landed in Rapid City and Medics escorted her off the plane attached to tubes and such. Orion announced to me that we should pray for the passenger so we did while the lady in the row across from us looked on in amazement. She commented to me on it later at how sweet our boys are.

The passengers behind us also went of of their way to tell us that our boys were so perfectly behaved, much to their surprise. I guess they expected that when they were stuck behind two little kids that their flight would be a very loud, disturbed one. That did not happen. We were shocked.

We ended up staying in SD for over an hour before continuing on to Chicago and then to Nashville. Still, the boys held it together quite well.

When we arrived at Aunt Dorris’ house in Nashville the house was oddly empty and silent. Usually when we arrive they are there to greet us. But, apparently as we landed in Nashville, Deanna (Aunt Dorris’ daughter) was giving birth to a new baby girl. Abigail Lauren was born at 7:01pm that night and everyone was healthy and well.

Aunt Dorris arrived home later that night and we all enjoyed visiting. She had her grand daughter, Madeline, with her. Orion loved playing with Madeline while Ollie just loved giggling with Uncle Dennis and sticking a laundry basket on his head.

It was a very warm and comforting place to be and we miss it already.