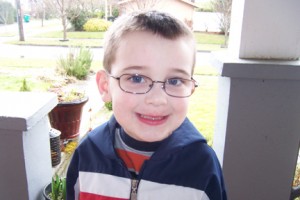 Orion got glasses about 10 days ago. It turns out that he’s far-sighted with astigmatism. That was a very unexpected outcome since both John and I are near-sighted with no astigmatism. But, such is the case. The eye Dr. even looked at me a bit oddly when I told her that neither one of us was far-sighted. I guess it is rare for that to not be genetic.

Orion is doing fairly well wearing his glasses. The rule is “on your face or in the case”. The first few days he would leave them sitting on the floor or on a chair. But now that we’ve chanted that over and over to him he’s getting it.

When his hair was shaggier he looked a bit like Harry Potter. Now he just looks like our smarty boy.

The Dr. says that he might grow out of the far-sightedness and not need glasses in a few years.