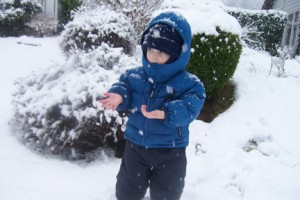 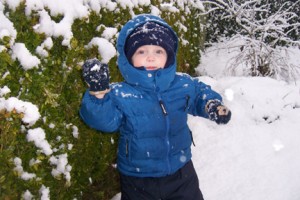 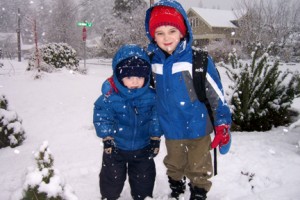 They didn’t cancel school so we suited up early for the bus so as to have some snow play time before it arrived. Ollie made a new discovery…the feel of melting snowflakes in his hand. Last time it snowed he spent very limited time out in it because he was so sick from some unknown illness. And he had never been out in it without gloves. This time I took his gloves off because they were bugging him. He just sat there with his hands in the air catching snowflakes. He was mesmerized by the experience.

We tossed a few snowballs and talked about how much we missed the igloos we had made a month ago in our front yard. Snow days always take me back to my childhood. There was nothing that could beat a snowy day, a good hill, and the hope of hot cocoa to warm up to later. I take great pleasure now in watching my kids experience those same joys in life.