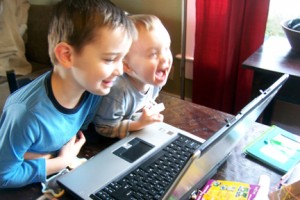 For years now, Orion has been deathly afraid of all Veggie Tales videos. He shivers and hides in the corner. It’s really crazy. I could never figure it out.

Then one day a light bulb went on in my head. I started evaluating all the videos he likes and all the ones he fears and found a common element. The ones he fears have some story of peril or good versus evil. He doesn’t do well with that. For Orion, it’s very hard for him to separate pretend from something real. So, while watching talking vegetables might just be cute and fun to some kids, to Orion the stories are far too real and scary.

To prove my theory I had a Veggie Tales DVD that had just a bed time song on it. No story of peril. No evil. I asked if he wanted to watch it and he was fearful just because it was Veggie Tales. But Ollie wanted to watch it so Orion reluctantly agreed and hid behind me watching. After watching the whole song he really liked it. Then he said “Mommy, maybe I’m not afraid of Veggie Tales anymore. That wasn’t scary at all.”

Theory proved. Here they are enjoying more Veggie Tales songs on the laptop.