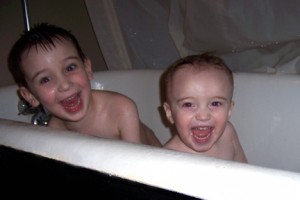 Daddy had a sudden day trip to Leavenworth so I was on my own with the boys. Not a big deal.

They were relatively calm today. Orion had speech therapy in the morning and did well. Then Ollie and I walked with Carol while Orion was at school. It was a bit c-c-c-cold but still nice to get out.

Then in the evening it was bathtime and I had fun hiding behind the door and popping out at them. They would break into big belly laughs each time.

Orion is at this stage where he is really interacting with Ollie. He’s finally taken to the older brother role. He helps Ollie put on and take off his shoes, talks to him, and teaches him things from books. It’s quite cute. But the cutest thing is that he constantly wants to hug his “little buddy” as he calls him. Here’s Orion forcing a hug on Ollie in the bath. Daddy says we can use this photo to embarrass them someday when they are grown up. How nice!