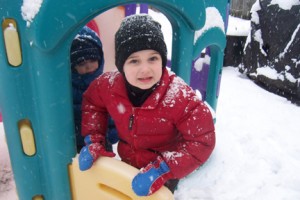 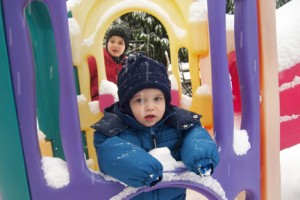 ORION UPDATE:
Snow day! School cancelled!!! Yep, it’s an exciting time to be a kid in Olympia, WA. We had many inches of snow today.

I was reminded of the movie “A Christmas Story” as I suited up the boys to brave the elements. It felt like suiting up for deep sea diving.

Daddy actually braved the elements himself and went to work this morning. But, thankfully he gave up half way through the day and returned home to play with us.

Ollie managed to tough it out in the cold for a brief 20 minutes before begging to go inside for a bath.

Orion, on the other hand, wanted more snow play. We are stunned and very pleased. In previous years he not only hated the snow, but feared it. Now he loves it. He’s becoming more and more like his peers as time goes by.

After Daddy came home they made a snowman that was taller than Daddy. They even had to make a ramp to get the gargantuan snow balls on top of each other. People kept stopping by to take pictures of the two snowmen in our front yard. I have yet to take a picture though but I will and I’ll add it later.

Before it got too dark, Orion and Daddy headed over to Lincoln Elementary and went sledding. Orion did a face plant in the snow but brushed himself off and got back on the sled. He had a great time. More snow is expected later in the week. Oh how I wish I was a kid again! 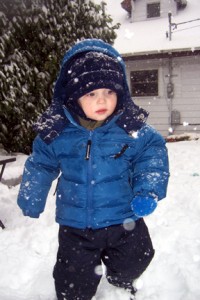 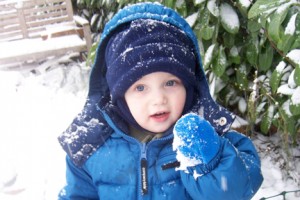 OLIVER UPDATE:
Ollie is more reluctant in the snow than his bigger brother these days and is particularly hesitant around the scary snowman in the front yard.

But, he agreed to suit up and play in the backyard. He looked like the “I can’t put my arms down” kid in “A Christmas Story” and actually toppled over a few times and was unable to get up without assistance. But, he still enjoyed trying to put snow in a bucket and kick a big beach ball around the back yard. Today is his last day of being a 1 year old! My little boy is growing up!!!