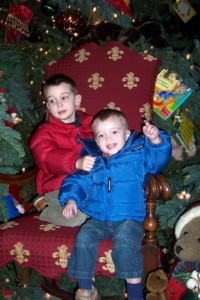 This morning we took the boys to Lattin’s Cider mill to have some hot apple cider and see the animals. Ollie can name most of the animals and is very excited about them. Orion found that he can eat applets and cotlets because they are gluten free so he got a treat too.

Then we decided to try and go to the Rotunda at the Capital to see the decorations there. The holiday displays at Olympia’s Capital Bldg are very controversial and have made national news. Fox commentator Bill O’Reilly did a segment on his show saying political correctness had gone too far and urged people to call the Governor.

It started when they decided not to call the tree a “Christmas” tree but rather a “Holiday Kid’s tree”. Then they allowed a nativity scene. This prompted an athiest group to post a sign that reads “There are no gods, no devils, no angels, no heaven or hell. There is only our natural world. Religion is but myth and superstition that hardens hearts and enslaves minds.” This enraged people and protests began. Then someone stole the athiest sign and dropped it off at a local radio station. And finally, the thing that prompted us to go see all the hubub was when we read that the Governor had approved a Festivus display at the Capital. If you are a Seinfeld fan then you know what Festivus is. It’s an invented holiday from Seinfeld where you air your grievances about others and fight your family around a Festivus pole. John insisted that we see the Festivus pole. But sadly, when we got there, there was no Festivus display. (No festivus for the rest of us….boo hoo)

The boys still had fun sitting near the tree and walking up and down the steps. Ollie loved the teddy bears and stuffed animals that surrounded the displays.

As we left the Capital the first snow flakes began to fall. Later that evening Orion and Daddy made a snowman in the front yard. It was the first year that Orion was unafraid of the snow and actually wanted to play in it. More snow is on the way and we look forward to fun with the boys in the snow.