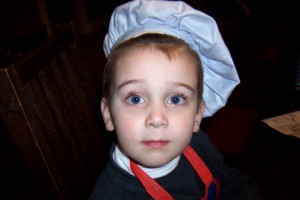 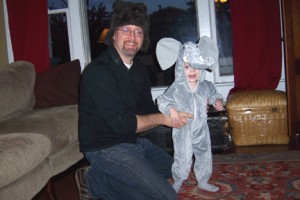 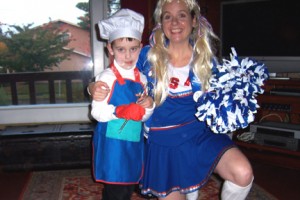 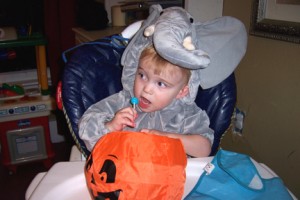 Today was Halloween…a huge event in our neighborhood.

The day started out like any other. John went to work and Orion had kindergarten in the afternoon.

Then while Ollie napped and Orion was at school, Mommy frantically cleaned and cooked because we were having company. Grandma and Aunt Kathy were coming over to help pass out candy, trick-or-treat, see the pumpkin house (a huge amount of pumpkins carved in the likeness of celebrities and such…2 blocks from us), and celebrate Kathy’s birthday a bit late.

The weather was supposed to be rain and lots of it. It rained most of the day but amazingly cleared up right around 5 PM. It was a good thing.

Orion started out going to just Dana Banana’s house (his speech therapist) but then started to warm up to the idea when more kids arrived at our house so we headed back out and did a few blocks. Orion always looked like a deer in headlights when people opened the door even though we practiced what to say over and over again. But Ollie jumped right in immediately and said “twick-tweat”.

Ollie hated the hat on his costume (too hot?) and kept trying to remove it. Orion kept losing his wisk. But still it was fun.

Kathy came dressed as an Obama Cheerleader and Grandma was a witch. John wore a bear hat and Mommy just wore a jester hat.

We had a smaller turn-out this year. Only 247 kids. Oh well.

After the festivities Kathy, Grandma and Mommy headed to their hotel to swim in the pool. It was the first time I had ever swam on Halloween night. Fun stuff.

Now we just have to get rid of all this excess candy before it makes us even fatter than we already are. Yikes!