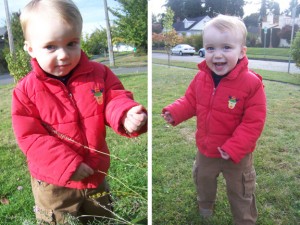 It used to be that Oliver was our easy one. And maybe that’s because Orion was and has always been a bit complex. But recently it seems like roles have changed.

Orion seems much more manageable, predictable, and tolerant of things he once did not tolerate. He’s definitely made some leaps and bounds in the past year.

And Ollie, a typical child, is now reaching his “terrible twos”. He’s trying to exert more independence but he doesn’t have the physical and verbal skills to do all that he comes up with in his head. So, he gets frustrated. That I don’t mind as much.

What I do have a struggle dealing with is the tantrums when the answer is “no” to something he wants. Recently the battle has been Playdo. We finally let him play with it hoping that he was past the stage of eating it. He does fine for a while and then he suddenly tries to eat a chunk. We find him with red or green stuff oozing out of his mouth. The evidence. We tell him no. We tell him not to eat it. He understands…we are certain. But he waits until we aren’t looking and does it again. So we take it away and this is when the tantrum happens. And he can throw a big, long, drawn out tantrum. So, we’ve been doing lots of time outs. But time out doesn’t work well in public and his tantrums often continue there for other reasons.

I wake up these days dreading the endless tantrums we will all endure from Oliver. Yes, that’s right…our sweet little Oliver is passing through a not-so-sweet stage. I tell myself, “this too shall pass”.

Here are pictures from today of him playing outside. He refused a nap and was intolerable inside so since the sun was shining we went outside to pass the time. Lord help me when the sun stops shining for the long, dark winter we always have in the Northwest.