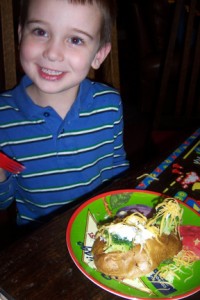 In an effort to get Orion to eat new, adventurous, and healthy things that match up with his gluten-free diet we decided to try something new. We called them “potato hills”.

Orion loves to pretend and it’s often hard to even pull him out of that pretend world into reality. So, we decided to use that to our advantage.

Daddy told him that the broccoli flourets were trees, the cheese shreds were people, the black sesame seeds were birds, and the sour cream was snow. Then he’d say “I’m gonna eat a snow covered tree….are you?” Orion would laugh and play along but it took him a while to actually eat a tree. He didn’t much enjoy it but he ate the broccoli without us holding him down and forcing it into him. So, that’s a move in the right direction. And he had never willingly eaten a baked potato before. Too mushy for him. But he ate that with no problem.

Finally, another family friendly meal that Orion can share with us!