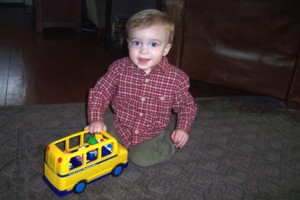 Well, there are two good things to announce recently about Oliver. First, he finally broke the binky (pacifier) habit. It was a tough few days when it came to napping and sleeping but he eventually got used to soothing himself back to sleep by just sucking on his blanket. Now he talks a lot more without that plug in his mouth constantly. But, the downside is that he puts everything that he shouldn’t in his mouth so you have to watch him constantly.

The other announcement is that the school district evaluated Ollie and it turns out he is NT. For those of you who don’t know what that means, it’s a term used in the autism community that stands for Neuro-typical. That means he is developing normally.

Two ladies came by and evaluated him. It was the exact same testing they did on Orion about 3 years ago so it was a strange deja vu for me. But it was also evident how completely different my two boys are. Ollie was very engaged with the ladies and talked a lot. He transitioned from one activity to the next with no problems. But when it came to doing shape puzzles he was truly puzzled. I can remember that Orion whized through the shape puzzles with flying colors at age 2. Orion also counted items much better and recognized more words and letters in books.

I was concerned before they told me the results. But apparently, Ollie is exactly where he should be developmentally. I guess kids on the autism spectrum tend to be super smart with the visual piece and numbers and letters. That explains Orion’s results. But they tend to struggle with transitioning, verbal, and social. Those were Ollie’s strong points.

So, our kids are very different and it’s a good thing. God is shaping us through raising these amazingly wonderful boys.