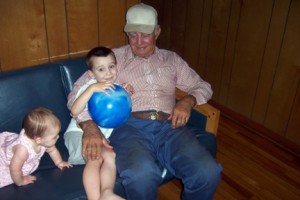 We arrived safely in Nashville last night. Surprisingly, the flight wasn’t as bad as imagined.

First off, Orion was amazing. He was so well behaved. He was very interested in the airplanes and had fun watching them take off. And he enjoyed sitting at the window seat and looking at all the clouds. He loved that he got gum when we were taking off and landing (a rare treat for him). And he happily and quietly played his game boy or drew pictures most of the flight.

Ollie was a bit more difficult even with Benadryl. Everytime they made an announcement he would wake up. Then he wanted to kick the seat in front of him or run up and down the isles. So, it was a bit of a wrestling match with him. But we survived.

We stayed at Aunt Dorris’ and she had BBQ waiting on us. It was so nice to see Aunt D and Uncle Dennis. It’s a very warm feeling to be around them both.

Today is Daddy’s birthday so we woke up and took him out for a nice breakfast at Cracker Barrell. He said it was the best birthday present ever to wake up in Tennessee, be around family, and go to Cracker Barrell.

Then we headed out toward Joe Wheeler State Park in Alabama. We are staying at a cabin there for a few nights.

After we arrived we had visitors. Uncle Matt, Aunt Oneida, Cousin Hannah (7 months old) and Grandpa George came by. It was very nice to visit with them. Here’s a picture of Grandpa George, Orion, and baby Hannah.