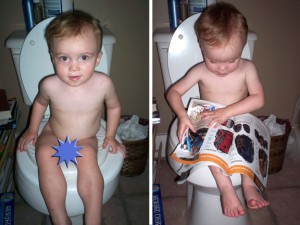 All of a sudden, out of nowhere, Ollie is interested in potty training. It started when one day he was in his high chair and he kept saying “poo poo”. That used to mean that he had just gone poo poo in the diaper. But when I scooped him up and went to change him, his diaper was clean. And then he said “pah-eee? poo poo?” and pointed toward the bathroom. So I thought…”why not?”

Imagine my surprise when he actually went. He was so proud and clapped and said “yay…poo poo. bye bye poo poo.” Then he pointed to the cabinet and wanted m & m’s like Orion used to get. I didn’t have any though (note to self: get chocolate potty rewards for Ollie!)

Then after his nap he woke up and said “pah-eee? pah-eee?”. I checked him and he was dry. So I plopped him on the potty and he peed. Amazing. Anyway, the trend has continued. He’s interested and continues to go. Now I understand those parents who brag “I had junior potty trained by 9 months!” (yeah, whatever). The truth is that some kids really do potty train all by themselves. I take no credit with Ollie. He’s so tiny and so cute on the potty. He may be small, but he’s always seeking to have the independence of a big boy. It will be so sad when he doesn’t need Mommy’s help anymore (probably by age 3 at this rate!)

**note** Ollie is stripped down naked in the pics because it’s about 95 degrees with no air-conditioning right now in Olympia. Oy!!!