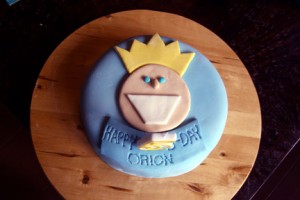 Okay…technically the date on this blog entry should be 8/10/08 since that’s when we had Orion’s party.

We had a party for Orion. Originally it was going to be at Priest Point Park with some of his kid friends as well as family. But then Orion came down with a constant, awful, hacking cough and the weather report was for rain. So, we pulled the plug on the park party and the kid friends and decided to have a smaller gathering at our house for just family. That way we would only infect the ones we dearly love (kidding….ha ha…we hope you all are still healthy).

Grandpa Jim and Grandma showed up with balloons that were quite entertaining for the boys. It’s amazing how much play mileage you can get out of a simple balloon.

Daddy made Orion a special cake because Orion insisted he wanted a blue cake with a king on it and one candle. He was very detailed and specific so Daddy took on the challenge and delivered. Mommy never could have pulled that off.

The big downer was that Orion was really feeling ill and wasn’t his usual, chipper self. And Ollie was stealing his thunder by being charming. We certainly felt bad that Orion sat in the corner quietly and felt ignored for a while.

So, to make up for it…we took Orion out tonight for his actual birthday. First we picked up some take-out japanese and them we headed to Burfoot Park. As luck would have it, there was another little boy that was 5 years old that Orion quickly became friends with. It was neat to watch them socialize. The gap between Orion and his peers is getting smaller and he seems rather typical these days. We are so glad that he is reaching out socially.

After park play we headed out to Baskin Robbins for some ice cream. Then we went home and had movie night with just Orion (Ollie was fast asleep). We watched Chicken Little and Orion seemed to enjoy it. Our little boy is growing up so fast!