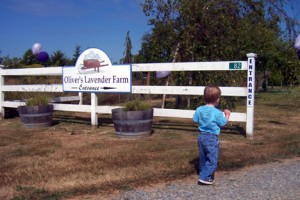 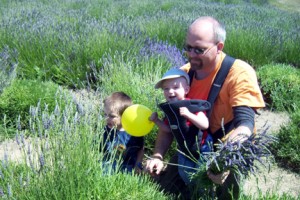 Last week Ollie was very sick. He spiked a fever of 105 so the Doctor asked us to bring him into the office. It turned out that he had Roseola, also known as infant measles (although not at all as serious as regular measles). It’s quite common in young kids and starts with a high fever and after the fever breaks they break out in a rash all over their body. But, once the rash arrives they are no longer contagious. So, when Ollie’s rash went away we asked the Dr if it was okay to take him camping and he said yes. So, we dragged our spotted but chipper child on our family camping trip. He didn’t sleep well in the tent but he still seemed to enjoy being outdoors.

Our camping trip was in Sequim during the annual lavender festival so we decided to head over to a few lavender farms and check things out. We even found one farm called Oliver’s Lavender Farm. Ollie was more interested in the purple balloons than the lavender. But he enjoyed being in the front pack with Daddy.