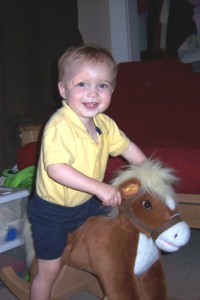 Last night Ollie was roaming around playing with stuff and he wandered upon a tiny wrench. I didn’t see that he had it in his hand and he stumbled and fell and cut his face right above his right eye. It was really frightening because head injuries always bleed a lot and he reached up and smeared his blood on his face. So, to me it looked like the whole side of his face was bleeding. As it turns out it was just two cuts above his eye.

I debated whether to take Ollie in for stitches but it was almost 9:00pm and Daddy was out-of-town. The concept of me and the boys waiting around in the emergency room after their bedtime seemed like a horrible one so I cleaned the wounds and just checked Ollie frequently in his crib for bleeding. Not a fun night.

The first thing Ollie said when he woke up was “Owee…band-aid” and then he held his head. Then today, after a walk with Carol and then picking up Orion from summer preschool, we all went into the backyard to play and Ollie was insistent on playing in the pool. He keeps saying “poo, how”…which in his language means “pool, help”. He tried dragging the hose over and filling up the pool but I didn’t want him getting his wound wet and getting bacteria in it. So, instead we played in the sandbox.

It is likely that we will end up in the emergency room with these boys more times than we can count before they leave our care. It’s totally the grace of God that any of us actually make it to adulthood.