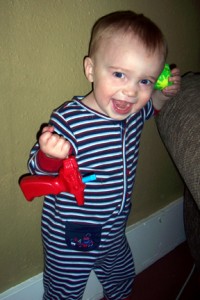 I’ve heard about how when you are held captive by terrorists they often use sleep deprivation as a form of torture. I can see why. It is very effective in breaking you down.

Ollie was a terrorist last night. I don’t know what happened but he decided at about 1:00AM that he was done with sleeping and wanted to play. He dozed off a few times here and there. But for the majority of his normal sleeping hours he attempted to pile up his blankets and such and scale the crib to get out and destroy things. His goal was probably to lick electrical outlets or swallow poisonous cleaning agents. That child!!! At 4:00AM Mommy gave up and went into his room.

Then, after all that lack of sleep you would think he’d make up for it with a power nap. Mommy had hoped he would sleep while big brother was at school so she could nap. But, alas…no power nap. The child was just running on fumes all day long. And he was into trouble with a capital T. He wanted to bang on windows, knock down lamps, all the no-no’s he knew of. Arrrggghhh!!!! Mommy had no tolerance because of her lack of sleep so some small scuffles came up between them.

In the evening Lynsey was scheduled to watch both boys while Mommy and Daddy had plans to go to the new Indiana Jones movie. But, we decided to pass on the movie and opt for sushi instead. Mommy was too fearful that she’d sleep through the movie. After sushi, we went in search of a crib tent only to find that they are quite expensive. So, we decided to get one on eBay and suffer through a few more nights of the crib scaling crazy boy! Look at this picture of him from today as he was trying to get behind the couch and knock over a lamp. He looks so cute and innocent. Looks can be deceiving!