Who's afraid of the big, bad,…icecream truck? 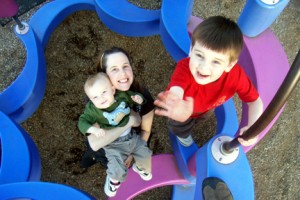 The weather was so nice today. It was about 70 degrees and perfect.

After Orion returned home from school we played out at the sandbox until Daddy came home from work.

Then we loaded everyone in the van, picked up some picnic food at the store, and went to Tumwater Historical Park.

Orion is so fearless and independent at the park these days. It seems like not so long ago that we had to hover around him during his every move to prevent falls or disappearances. Not anymore. He wants to do it on his own and he can. Now it’s Ollie that we hover around who desperately wants to do all of the things big brother can do.

The icecream truck arrived on the scene and Orion was scared at first. But he was convinced to go with Mommy. He had a fudgepop and dripped it everywhere. The good (or maybe bad) news is that we probably will never again have to convince him that the icecream man is not scary. Chocolate fixed that problem.