Surviving the noise of duct cleaning with a sensory child 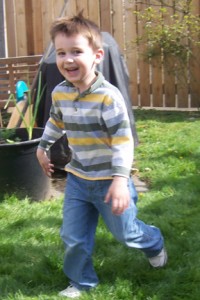 ORION UPDATE:
This morning the duct cleaning guy arrived and cleaned out our air ducts. I suspected this would be a highly traumatic event for Orion since he doesn’t like loud, sudden noises so I was prepared.

I had the construction headphones ready and waiting and I loaded him down with some ankle weights to help him feel grounded too (a trick learned at Occupational Therapy). Then I had activities prepared for him to do in each room so we could move from one place to the next as needed. He was a little startled at first but ultimately he was fine.

Then in the afternoon Orion accomplished earning a toy he’s been trying to earn since last August, an electronic Thomas train, station, and track. He had lots of fun with that.

In the afternoon we all played in the backyard. Here he is being chased around by Mommy. 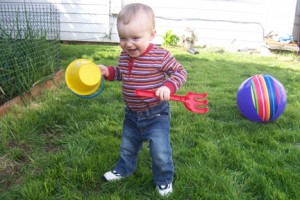 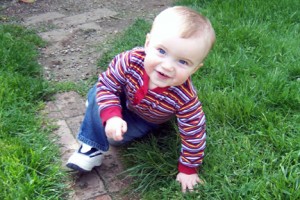 OLIVER UPDATE:
Ollie loved the freedom of walking around the yard and climbing up the slide. He loved going down the slide too. He also really enjoyed going in and out of the little play house.

Below is a video of the little guy. Notice when he says “hi” it sounds like a long, southern accent. He always does it that way and it’s very cute. I guess he’s embracing his southern roots.