Spontaneous trip to Seaside, OR 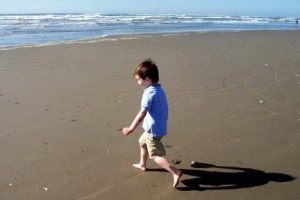 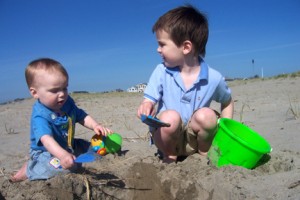 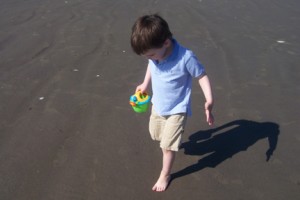 ORION UPDATE: Word got out that the weather was actually going to be fabulous on Friday and Saturday…a rare thing in the Pacific Northwest for the middle of April. So, we booked a room at the Tradewinds in Seaside, Oregon.

We arrived Friday afternoon and were pleasantly surprised at how nice the accomodations were. It was a one bedroom condo and it was directly across the street from the beach. Our bedroom and living room windows had great views of the beach.

Since we arrived on a Friday it was very uncrowded and we felt like we had the place to ourselves.

The boys loved digging in the sand and making sand castles. A few scuffles broke out when it came to sharing shovels, but mostly they were just happy to be in the sun and enjoying some good grubby play time. Orion even took a dip in the water with Daddy assisting him.

The next morning we played at the beach again and then headed to town to see the carousel at Seaside Mall. We ate clam chowder followed by some Tillimook icecream (a local specialty) and wandered the shops. The boys were very well behaved.

The only downside to this amazing family trip was that John caught a cold and is now ailing and snotty on the couch. But it was still much fun! 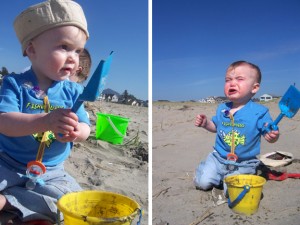 OLIVER UPDATE:
Oliver really enjoyed playing on the beach in Seaside, Oregon. He’s been to a beach before but this was the first time he was old enough to actually play.

Daddy had fun trying to build sand castles faster than Ollie could knock them down. In the end Ollie won.

Occasionally the boys wanted their watering can filled up with water and when Mommy would head to the ocean to fetch more water, Ollie would lose it (see picture!). He would cry and chase after Mommy. I guess he’s got a bit of separation anxiety.

Speaking of chasing after Mommy, Oliver is now a proficient walker. (I will add video of this later.) He took his first tentative steps on 3/21/08 and has just continued to build his skills. He still topples over occasionally but for the most part he’s a movin’ man. And this child gets in to everything. You turn your back for 1 second and he has created a vast path of destruction. It keeps things interesting.

Ollie is also talking more and his favorite thing to say these days is “hello”. He sat on the beach waving at birds, dogs, and joggers saying “hello, hello, hello”. It’s very cute.