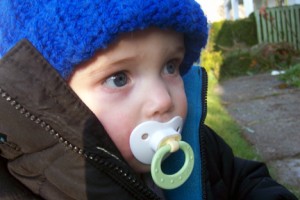 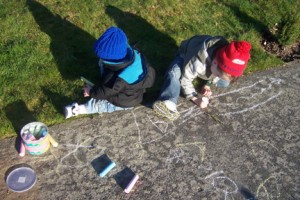 Today the sun actually shined! Woo hoo! After big brother Orion returned from school he said he wanted to go out in the sunny day. So, even though it was quite cold, we ventured out with some sidewalk chalk.

Ollie started out in his exersaucer but once he saw the fun Orion was having with the sidewalk chalk he wanted in on the action.

When Daddy returned from work we all went and had a family dinner night out at Johnny Rockets in the mall. Then Orion and Ollie played for a short while at the mall toys. Oliver was actually inspired to walk more and walked from toy to toy at the mall. He was wobbling like a drunken sailor, but a darn cute drunken sailor! It won’t be long before he’s taking off with no fear.