Clothes mishap at Carol and Dustin's 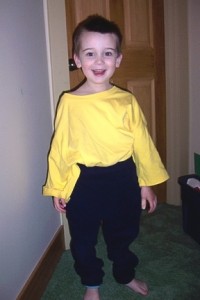 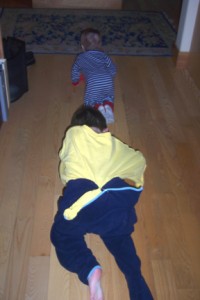 Well, last night we were invited over to Carol and Dustin’s for dinner. And even though I was feeling quite sick, it seemed like it might be easier to watch the boys if they got a change of scenery. They always love being over at Carol and Dustin’s.

But before we left the house, Orion kept whining that he wanted chocolate almond milk. We were completely out of it and so instead I gave him chocolate soy milk, even though we took soy out of his diet recently as an experiment to see if it stopped his diarrhea

Well, that must have been the culprit because shortly after eating dinner at their house he had a huge poo-poo explosion that soiled all of his clothes. Usually I have a spare outfit in the car but it wasn’t there. So they gave me a big yellow shirt and I fashioned some pants with a safety pin and the sweatshirt I was wearing. Orion apparently has no shame because he wanted to stay and play regardless of his silly outfit.

When we made it home Oliver refused to go to bed and made it tough to do our nighttime routine.

Anyway, today is our last day without Daddy. If I can just make it through the next twelve hours I’m home free!!!