A cold walk with Ollie 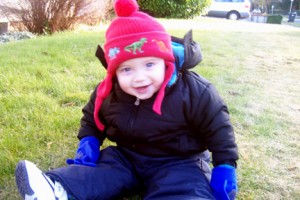 Oh my! It is quite cold in these parts. So cold that by 1:30pm in the afternoon, when my friend Carol arrived to go walking with me, the grass on our front lawn was still frozen solid. But the sun was shining and it was such a clear, pretty day that we just wanted to be out there. So, I bundled Oliver in 3 layers including snow pants and off we went.

Half way through the walk it occurred to me that Ollie was sucking on his hat likely because I had forgotten his binky (pacifier). I didn’t know how he would react since that kid has that thing in his mouth constantly. Maybe it was the beautiful scenery or the riveting conversation and company he was amongst, but he simply didn’t care. That’s a good thing since I’ve been wondering how on earth we were ever going to wean him from that thing.