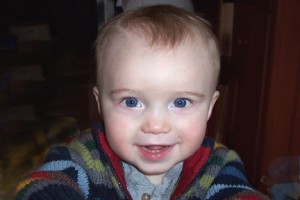 Oliver had his very first experience being in childcare when I went to AMFM (a morning for moms) today at Grace Covenant Community Church.

When I first dropped him off at the nursery he cried and made his pouting face. But apparently, minutes later, he was happy to play with all the new toys without his brother knocking him over. When I returned to pick him up an hour and a half later he had his back turned to me and was content and playing. But the moment he heard and saw Mommy he broke out into tears as if to say “How could you leave me with these strangers Mommy?”. He recovered very quickly though. I just hope he didn’t pick up some super germ while playing with the other babies.