A trip to the zoo 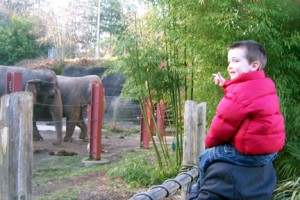 It was the last day of 2007 and Daddy had taken the day off of work to be able to go to Orion’s ABA assessment in Tacoma. But, our meeting was cancelled because the therapist was sick.

So, since it was a clear, sunny (but cold) day we loaded up the boys and headed out to the Point Defiance zoo.

Orion was very insistent that he did not want to go to the zoo. But after we told him there was a little park inside with a slide he reluctantly agreed. As it turns out, this year he was way more interested in the animals than the slide.

As soon as he saw the black and white monkeys swinging around on ropes he erupted with giggles. Everyone around watched Orion in amusement. His glee was contagious.

Ollie just kicked back in his stroller the whole visit, bundled in blankets and layers. It was quite cold out. But surprisingly he was awake for the whole zoo visit.

Orion loved the fish, the starfish petting area, the whales, the elephants, and mostly the monkeys. He just couldn’t get enough of those monkeys. Maybe that’s why he loves Curious George so much.