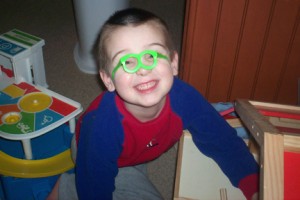 Daddy went to Chicago for work and then rented a car to drive to Tennessee and visit his family. Since he left it’s been a wild ride here on the homefront. As luck would have it (sarcasm), we all came down with colds at this time…including John. No fun.

Things were okay on Tuesday. Orion went to school and things seemed fine in the evening. But then when it was time to sleep Oliver just couldn’t. He was too congested. Mommy had to go in and out of his room constantly and rock him back to sleep. Mommy finally gave up and slept on the couch with him briefly. (emphasis on briefly!)

Wednesday really fell apart. That is our busy day where Orion has back to back therapies. He has speech first, then OT next, then off to school. He was fine through speech but then in his OT appointment something shifted in his brain and he lost it. A huge meltdown occured and I had to peel him off the floor of the place kicking and screaming and force him into the car to leave. It was an embarrassing mess. Then he kicked and screamed all the way home even hitting poor litte Ollie in his rage. When we got home the fit continued. Anyway, eventually he calmed down after a bath and a Charlie Brown video.

The next few nights were more sleepless ones with Ollie up constantly with his cold. Oy!

But, on a happy note, I did get some time to myself when our sitter came over last night to watch Orion. Ollie and I went over to dinner at Carol and Dustin’s and had some great Latkas to celebrate Hanukkah. (Carol is Jewish – and also a Christian)

Then today Grandma came over and watched Orion while Ollie and I met Carol and went to a Christmas Brass concert at a church downtown. It was a nice time. Now it’s back to the grind with the boys! I just pray Ollie sleeps tonight but based on the volume of snot comin’ out of this kid’s nose, I kind of doubt it. 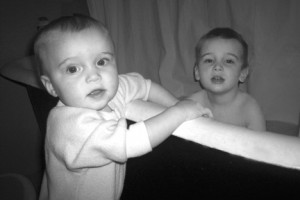 OLIVER UPDATE:
Ollie’s new thing is that he likes to pull up on the bathtub while Orion is taking a bath and try to grab his bath toys out of the bath. Orion enjoys the attention but doesn’t enjoy the sharing of toys.

Ollie’s personality is blossoming. He has these fake, babbling conversations with himself and it’s very cute. Last night he even had a fake, heated conversation with a picture of Daddy that was on Carol’s fridge. He apparently had a lot to reprimand Daddy about after being left with a crazy brother and a frazzled mom!