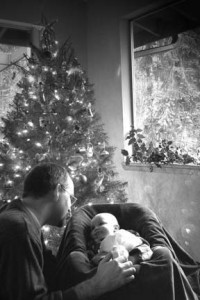 In Orion’s world lately fear is the key word. When it snowed this past Saturday he cried and cried for us to make it stop snowing. We needed to venture out in the snow to the store and he was terrified to leave the house in the white stuff. Then when he heard we were getting a Christmas tree he was terrified again. “No Christmas Tree….NO…I SAID NO!”. Then, since we thankfully took 2 vehicles to pick it up, I had to load him in the van and sneak him home while Daddy secretly tied the tree to the truck. The covert mission ended when he saw Daddy pull up with the tree in the back of the truck. The tree sat on our front porch for a day drying off while Orion peaked out the window in fright repeatedly. He quietly mumbled to himself….”We’re not getting a Christmas tree. No Christmas tree.”…over and over and over.

When the Christmas tree finally entered the house a day later terror took over. How could we do this horrid thing to him? What kind of crazy people bring a scary, overly scented tree into a house? Everything about him was on edge. Mommy and Daddy were trying to communicate things about the tree…it’s straightness, it’s position, while Orion panicked and ran from the kitchen to the living room screaming “Take it away Daddy. TAKE IT OUT”. We both tried comforting. I showed him pictures of him happily standing next to numerous Christmas trees last year. Not effective at all. It’s like rationalizing with a mad man. He finally reluctantly accepted his fate that the tree was staying and cowered in the corner the rest of the evening until Oliver woke up from his nap. Oliver, wide eyed and interested, wanted to touch the tree. We let him and told him “Christmas Tree…it’s a Christmas Tree”. He liked it. He giggled. Orion saw this and thought “If he’s touching it, I can do that too”. Orion wandered over and touched the tree and fake giggled along with Ollie’s real giggles.

The next night we tried decorating. The fear monster showed it’s ugly head again. But, the enticement of the cute little decorations; a taxi cab we got in NYC, a double-decker red bus we got in England, a toy sled, multiple snoopy decorations….lured him in. He wanted to touch them. He saw Daddy put one on the tree and he wanted to do the same. He fought off the fear monster and he willingly decorated. He survived and overcame! It’s baby steps in our house to small victories. My hopes are renewed that maybe someday Orion will get past all the little nagging fears that hold him back and learn to enjoy the simple things in life.

(ps…Daddy took the digital camera on his trip to Chicago/Nashville that he left for this morning so this picture is an old one when Orion was just 4 months old. I love this picture. Times were simpler then!)