Our first hotel stay with both boys 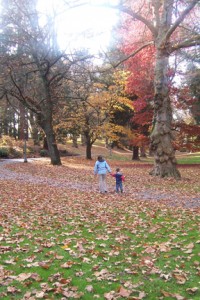 We decided to take a family vacation to Portland, Oregon. It was our first hotel stay with both boys.

Orion apparently had little recollection of hotel stays so we had to explain to him where we were going. He kept calling it a “Ho-Towel”.

The forecast called for rain for both of the days we were going to be there but the forecast was wrong. The weather was perfect. Not too cold, not too hot and as clear as can be.

We stayed at the Hilton Hotel in downtown Portland. It was challenging finding parking and maneuvering the boys around the city. It was even more challenging sleeping with both boys in the same room. Every time Oliver woke up to nurse I was so paranoid that Orion would wake up too. So I would leap out of bed any time Oliver made the slightest peep. Not much sleep was had by Mommy and Daddy.

But we had some awesome meals while we were there. We ate takeout from an asian place called Dragonfish and the Caramel Ginger Chicken was delicious.

On Saturday we shopped at the Saturday market. It’s kind of an arts-and-crafts market with food and music.

Then we went to the Laurelhurst neighborhood to let Orion play at the park and to look at the amazingly beautiful leaves.

In the evening Mommy took turns swimming in the hotel pool with the boys. It was Ollie’s first time swimming and his little kicking feet were so adorable. It was Orion’s first pool swim and he loved it too. It made me think that I really need to sign the boy up for some swimming lessons.

Despite all the struggles and fuss, it was a nice family get-away.